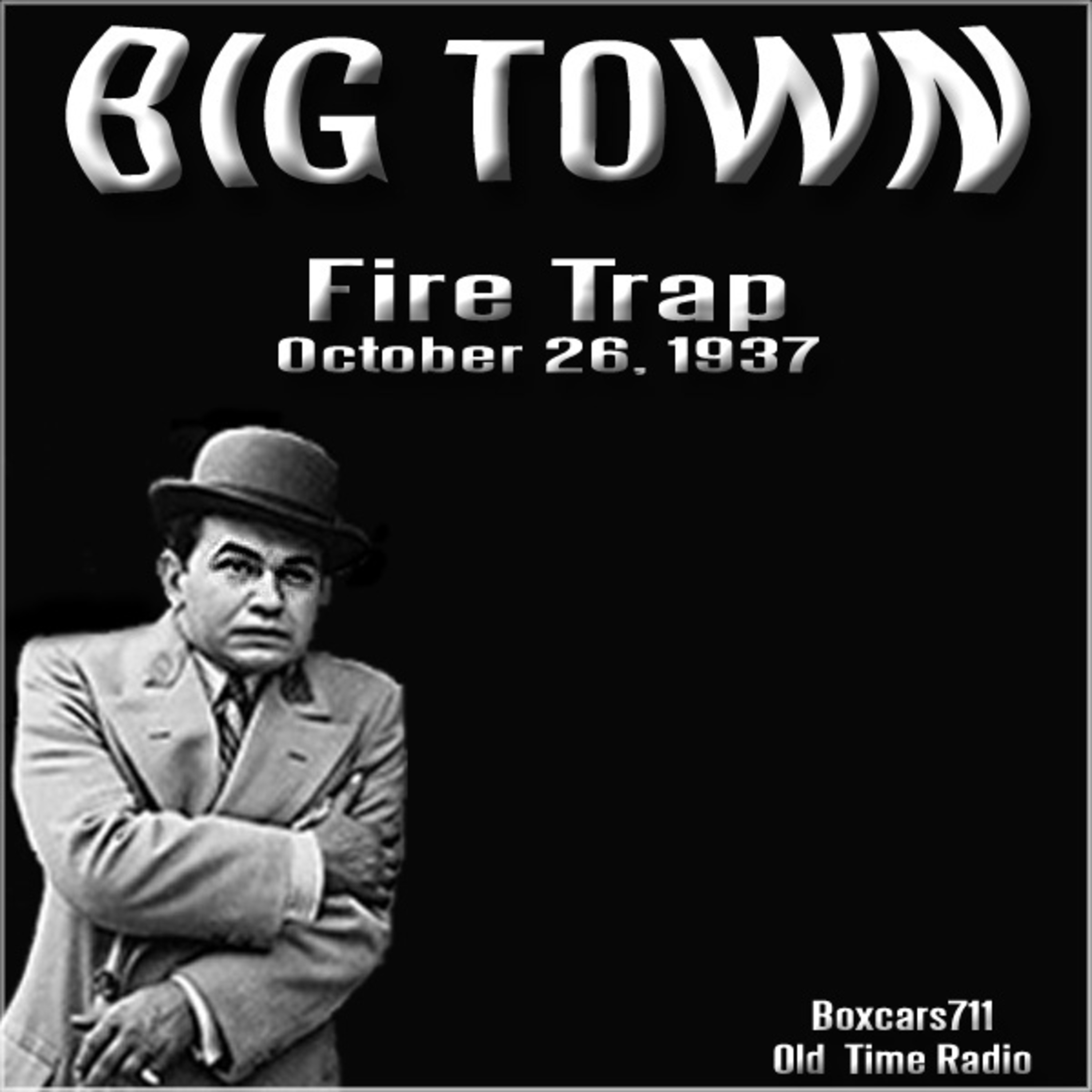 The Harding Factory Fire" aka: Fire Trap (Aired October 26, 1937)
Hard-nosed editor, Wilson, as played by Robinson would get the story no matter what it takes. Though sometimes over the top, Robinson was excellent in his role. The stories were well written and directed by William N. Robson as well as McGill. The skill of this group shows in making the series very good radio. The show was a big promoter of the free press and the first amendment with its opening sequence: "Freedom of the press is a flaming sword! Use it justly...hold it high...guard it well!" The second series began immediately in the 1943 season when the production moved from Hollywood to New York. Robinson left (Trevor left two years earlier as her career starting taking off) and McGill reorganized the series placing Edward Pawley in the role of Wilson opposite Fran Carlon as Lorelei. Pawley's Wilson was more mellifluous compared to the rather nasty Robinson. THIS EPISODE: October 26, 1937. Program #2. CBS network. "The Harding Factory Fire" aka: Fire Trap. Sponsored by: Rinso. The Illustrated Press is being sued for libel by William Harding. Lorelei has called the Harding factory fire, "Harding's Inferno." Steve Wilson is an even bigger louse than his boss Peabody. He organizes a divorce scandal to bring down Harding. Steve is such a rat, that his actions shame himself! He plans to resign from The Illustrated Press and Lorelei plans to do so as well. The middle Rinso commercial dramatizes a scene in which a society lady complains that before Rinso, her servant Bertha was always so cross on laundry day. Steve also has a Swedish maid named Mina (whose accent is thick enough to be cut with a linotype machine). Edward G. Robinson, Claire Trevor, Hanley Stafford, Carlton KaDell (announcer), Victor Rodman, Don Wilson, Ellen Brown, Beaudelann Rosing. 29:20. Episode Notes From The Radio Gold Index.

3d ago3d ago
Subscribe
Unsubscribe
Weekly
RelicRadio.com presents tales of the strange and bizarre, the weird and the wicked. Stories not necessarily of the supernatural, but of the unnatural. Join us for Strange Tales, featuring radio drama at its most mysterious and unusual. Abnormal old time radio!
F
Flashback Requests (Barry James)

7d ago1w ago
Subscribe
Unsubscribe
Monthly
Barry first found music when he borrowed his sister's record collection when he was about eight and was hooked. When Caroline started it was a new beginning, and he listened to all the stations, but Caroline was his favourite by far. Later he became a singer in a band, then started doing discos when he was 18. He joined Caroline in 1977, touring the country with the Caroline Roadshow for 10 years, having great fun. Barry helped with tender trips and worked on the Ross Revenge in '84 and '85. ...
R
Rockhouse on Oldies 104

14d ago1w ago
Subscribe
Unsubscribe
Weekly
Donate here: http://www.radiostorm.com/donate Subscribe to our Patreon here: http://www.radiostorm.com/patreon Join Topeka's own Marshall Barber as he takes you through the roots of rock and roll with classic soul, R&B, and rock! Vinyl is a large part of each show, as some songs are very hard to find. Support this podcast: https://anchor.fm/radiostorm/support
T
Treasure Island Oldies

2d ago2d ago
Subscribe
Unsubscribe
Weekly
A weekly Podcast that covers events that took place this week in Rock & Roll History; who was in the studio recording what would become a big hit, and spotlight artists that are celebrating birthdays this week. Join me for the entire weekly four hour radio show, Treasure Island Oldies, The Home of Lost Treasures at www.treasureislandoldies.com. On the air every week since 1997,
O
Old Time Rock n Roll

1d ago1d ago
Subscribe
Unsubscribe
Weekly
Old Time Rock n Roll is the largest oldies podcast in the world today. Over 2.3 million listeners have enjoyed the huge library of tunes. Host Lee Douglas uses his personal 120,000 song library to spin the classics,as well as the obscure songs of the 50's,60's and early 70's. Whether its doo wop, rockabilly, Rythym and Blues or pop, Old Time Rock n Roll has it all. Listen and be transported back to a time when the biggest problem we had was getting a date for Saturday night.
S
Sideshow Sound Theatre┃Music & Film Soundtrack Podcast

7d ago1w ago
Subscribe
Unsubscribe
Weekly
Eddie Trunk, the most well-known name in hard rock and metal music, brings his insight, commentary, reviews, discussion and in-depth interviews to the podcast world! Join Eddie and his famous friends in rock and entertainment every week for a rollicking good time. To access the entire show archive, go to PodcastOne.com.
T
Too Much Rock

2d ago2d ago
Subscribe
Unsubscribe
Monthly+
The Too Much Rock podcast is a 30-minute journey through the weekly music acquisitions of its creator. It may feature power pop, indie rock, post punk, indie pop, or any other named or unnamed genre.
T
The Comic's Comic Presents Last Things First

7d ago0w ago
Subscribe
Unsubscribe
Monthly+
Asking comedians about the historic lasts and firsts in their lives as their comedy careers have blossomed.
Listen to 500+ topics