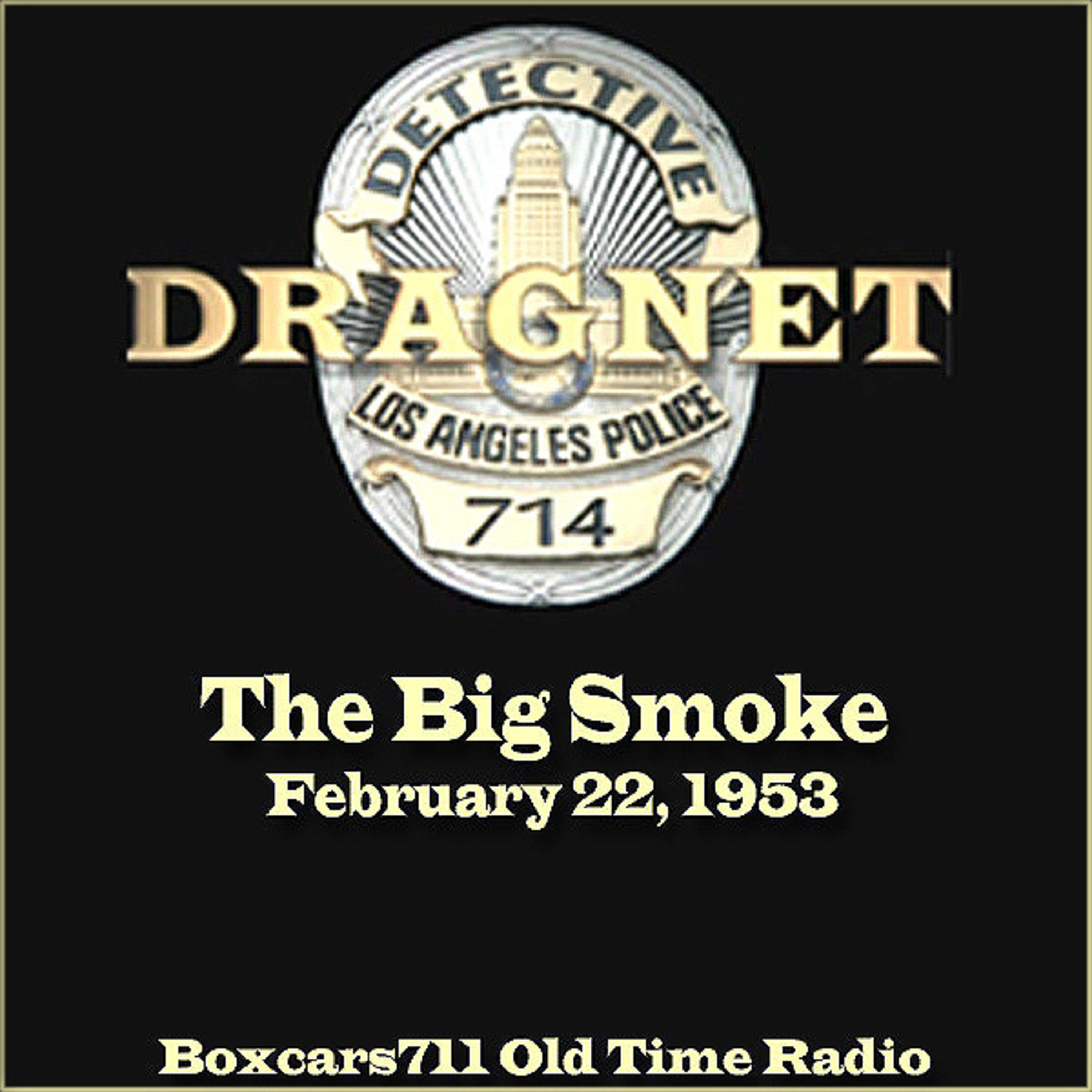 The Big Smoke (Aired February 22, 1953)
Dragnet was a long-running radio and television police procedural drama about the cases of a dedicated Los Angeles police detective, Sergeant Joe Friday, and his partners. The show takes its name from an actual police term, a "dragnet", meaning a system of coordinated measures for apprehending criminals or suspects. Dragnet debuted inauspiciously. The first several months were bumpy, as Webb and company worked out the program’s format and eventually became comfortable with their characters (Friday was originally portrayed as more brash and forceful than his later usually relaxed demeanor). Gradually, Friday’s deadpan, fast-talking persona emerged, described by John Dunning as "a cop's cop, tough but not hard, conservative but caring." (Dunning, 210) Friday’s first partner was Sgt. Ben Romero, portrayed by Barton Yarborough, a longtime radio actor. When Dragnet hit its stride, it became one of radio’s top-rated shows. THIS EPISODE: February 22, 1953. Program #192. NBC network. "The Big Smoke". Sponsored by: Chesterfield. Old Mr. Stone, who kept his life savings in his mattress, has been killed. His invalid wife has been beaten with a club. Quality upgrade, network, sponsored version of cat. #16280. Jack Webb, Ben Alexander, George Fenneman (announcer), Hal Gibney (announcer), John Robinson (writer), Walter Schumann (music), Virginia Gregg, Stacy Harris. 29:50. Episode Notes From The Radio Gold Index.

2d ago2d ago
Subscribe
Unsubscribe
Weekly
RelicRadio.com presents tales of the strange and bizarre, the weird and the wicked. Stories not necessarily of the supernatural, but of the unnatural. Join us for Strange Tales, featuring radio drama at its most mysterious and unusual. Abnormal old time radio!
F
Flashback Requests (Barry James)

20d ago2w ago
Subscribe
Unsubscribe
Monthly
Barry first found music when he borrowed his sister's record collection when he was about eight and was hooked. When Caroline started it was a new beginning, and he listened to all the stations, but Caroline was his favourite by far.Later he became a singer in a band, then started doing discos when he was 18. He joined Caroline in 1977, touring the country with the Caroline Roadshow for 10 years, having great fun. Barry helped with tender trips and worked on the Ross Revenge in '84 and '85. ...
T
Treasure Island Oldies

2d ago2d ago
Subscribe
Unsubscribe
Monthly+
A weekly Podcast that covers events that took place this week in Rock & Roll History; who was in the studio recording what would become a big hit, and spotlight artists that are celebrating birthdays this week. Join me for the entire weekly four hour radio show, Treasure Island Oldies, The Home of Lost Treasures at www.treasureislandoldies.com. On the air every week since 1997,
O
Old Time Rock n Roll

1d ago1d ago
Subscribe
Unsubscribe
Monthly+
The Too Much Rock podcast is a 30-minute journey through the weekly music acquisitions of its creator. It may feature power pop, indie rock, post punk, indie pop, or any other named or unnamed genre.
T
The Eddie Trunk Podcast

5d ago5d ago
Subscribe
Unsubscribe
Weekly
Eddie Trunk, the most well-known name in hard rock and metal music, brings his insight, commentary, reviews, discussion and in-depth interviews to the podcast world! Join Eddie and his famous friends in rock and entertainment every week for a rollicking good time. To access the entire show archive, go to PodcastOne.com.
T
The Comic's Comic Presents Last Things First

1d ago1d ago
Subscribe
Unsubscribe
Monthly+
Asking comedians about the historic lasts and firsts in their lives as their comedy careers have blossomed.
F
Filip & Fredrik podcast