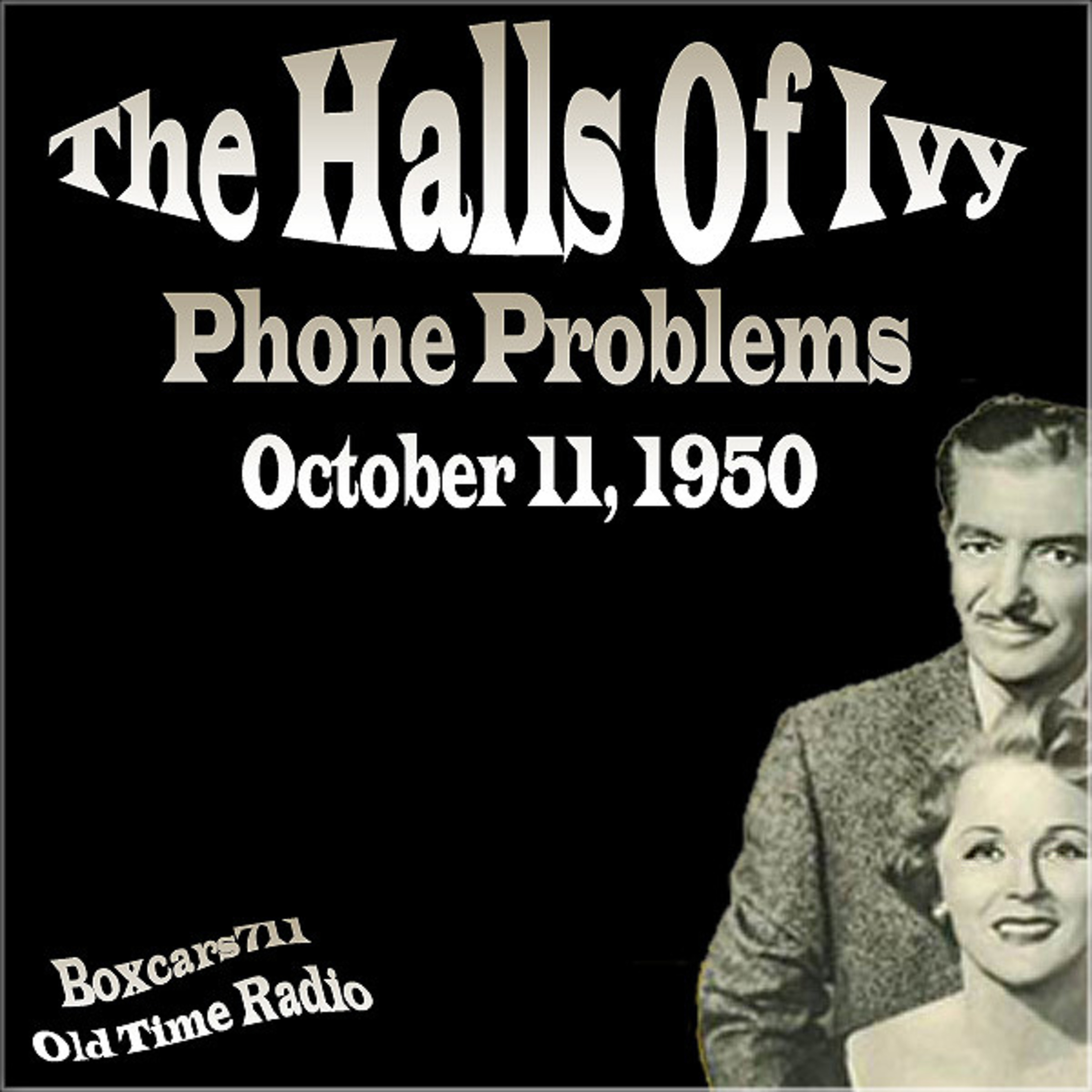 Phone Problems (Aired October 11, 1950)
The Colmans had shown a flair for radio comedy in recurring roles on The Jack Benny Program in the late 1940s, and they landed the title roles in the new show. The Halls of Ivy featured Colman as William Todhunter Hall, the president of small, Midwestern Ivy College, and his wife, Victoria, a former British musical comedy star who sometimes felt the tug of her former profession, and followed their interactions with students, friends and college trustees. Others in the cast included Herbert Butterfield as testy Clarence Wellman, Willard Waterman (then starring as Harold Peary's successor as The Great Gildersleeve) as John Merriweather, and Elizabeth Patterson and Gloria Gordon as the Halls' maid. THIS EPISODE: October 11, 1950. "Phone Problems" - NBC network. Sponsored by: Schlitz (commercial deleted). A strange man from the telephone comes to call. Is Emerson Hall (no relation to Todd Hunter Hall) worth saving? Ken Carpenter (announcer), Herb Butterfield, Gale Gordon (sounds as if he might be impersonated), Robert Easton, Milton Merlin (writer), Barbara Merlin (writer), Ronald Colman, Benita Hume, Don Quinn (writer, creator), Henry Russell (composer, conductor), Nat Wolff (director). 30:14. Episode Notes From The Radio Gold Index.

5d ago5d ago
Subscribe
Unsubscribe
Weekly
RelicRadio.com presents tales of the strange and bizarre, the weird and the wicked. Stories not necessarily of the supernatural, but of the unnatural. Join us for Strange Tales, featuring radio drama at its most mysterious and unusual. Abnormal old time radio!
F
Flashback Requests (Barry James)

23d ago3w ago
Subscribe
Unsubscribe
Monthly
Barry first found music when he borrowed his sister's record collection when he was about eight and was hooked. When Caroline started it was a new beginning, and he listened to all the stations, but Caroline was his favourite by far.Later he became a singer in a band, then started doing discos when he was 18. He joined Caroline in 1977, touring the country with the Caroline Roadshow for 10 years, having great fun. Barry helped with tender trips and worked on the Ross Revenge in '84 and '85. ...
T
Treasure Island Oldies

4d ago4d ago
Subscribe
Unsubscribe
Monthly+
A weekly Podcast that covers events that took place this week in Rock & Roll History; who was in the studio recording what would become a big hit, and spotlight artists that are celebrating birthdays this week. Join me for the entire weekly four hour radio show, Treasure Island Oldies, The Home of Lost Treasures at www.treasureislandoldies.com. On the air every week since 1997,
O
Old Time Rock n Roll

5d ago5d ago
Subscribe
Unsubscribe
Monthly+
The Too Much Rock podcast is a 30-minute journey through the weekly music acquisitions of its creator. It may feature power pop, indie rock, post punk, indie pop, or any other named or unnamed genre.
T
The Eddie Trunk Podcast

1d ago1d ago
Subscribe
Unsubscribe
Weekly
Eddie Trunk, the most well-known name in hard rock and metal music, brings his insight, commentary, reviews, discussion and in-depth interviews to the podcast world! Join Eddie and his famous friends in rock and entertainment every week for a rollicking good time. To access the entire show archive, go to PodcastOne.com.
T
The Comic's Comic Presents Last Things First