Society Conversations Year Old Forensic Transmissions Mikita Brottman True Crime Storytelling
By Forensic Transmissions and Mikita Brottman. Discovered by Player FM and our community — copyright is owned by the publisher, not Player FM, and audio is streamed directly from their servers. Hit the Subscribe button to track updates in Player FM, or paste the feed URL into other podcast apps.


MP3•Episode home
By Forensic Transmissions and Mikita Brottman. Discovered by Player FM and our community — copyright is owned by the publisher, not Player FM, and audio is streamed directly from their servers. Hit the Subscribe button to track updates in Player FM, or paste the feed URL into other podcast apps. 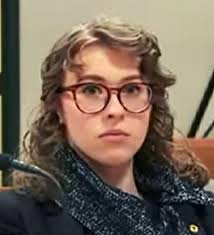 Ezra McCandless (born Monica Carlson), 20, chose a new “gender neutral” name because she sometimes identified as a boy. At the time of the crime, she had three suitors: on/off boyfriend Jason Mengel, 35; Alex Woodworth, who called her his “boy,” and John Hansen, who (according to McCandless) sexually assaulted her. When the crime occurred, Ezra had moved out of Jason Mengel’s home in Eau Claire, Wisconsin, and their relationship had ended–partly because Jason had learned Ezra was having a sexual relationship with Alex Woodworth, whom (she said) liked to be aggressive and choke her during sex. Ezra wanted to get back with Jason. On March 22, 2018, she broke up with Alex, and he reacted badly. They went for a drive to “continue the discussion in a public place.” The car got stuck on a muddy road, and after trying to free themselves, the two got into a fight. Ezra claims Alex tried to sexually assault her. She stabbed him 16 times, then carved the word “boy” into her arm and went to a nearby farmhouse to get help. The prosecution claimed the attack was “an attempt to recaputure the relationship she wanted with Jason Mengel.”

During the trial, McCandless changed her plea from ‘not guilty by reason of mental disease’ to a ‘not guilty’ plea. She was found guilty of first-degree intentional homicide.

Listen to the episode here.

3d ago3d ago
Subscribe
Unsubscribe
Weekly
Based on the iconic, Emmy-nominated series on A&E, this show explores some of the most difficult-to-solve murders, which stymied investigators and went cold, sometimes for decades. In fact, one-third of all murders in America remain open. But thanks to dogged investigators and breakthroughs in forensic technology, these cases become part of the rare 1% of cold cases that are ever solved. Hosted by Brooke Gittings ("Convicted" and "Actual Innocence") and featuring the voice of original Cold C ...
D
Detective

24d ago3w ago
Subscribe
Unsubscribe
Monthly
The hit podcast from Investigation Discovery is back with an all-new season of stories from behind the yellow tape. This time, the storyteller is Detective Rod Demery, whose successful career is rivaled only by his dramatic personal life. Panoply Podcast Survey Fall 2017: http://bit.ly/2fKf5b2
U
Unresolved

6d ago6d ago
Subscribe
Unsubscribe
Weekly+
Every day, stories unfold that have no resolution. Unresolved is an investigative and immersive look at those stories, as host Micheal Whelan tries to determine why these stories - unsolved crimes and other unexplained phenomena - have no ending.
T
True Crime Garage

2d ago2d ago
Subscribe
Unsubscribe
Weekly+
Each week Nic & The Captain get in the garage and talk true crime and drink beer.
T
The Serial Killer Podcast

4d ago4d ago
Subscribe
Unsubscribe
Weekly
TSK is the podcast dedicated to exploring the serial killer phenomenon. Who the killers were, what they did and how. The show makes a significant effort into exploring the serial killers' background, especially their childhood and youth. It goes into detail in the killers' development, and describes the murders in graphic detail to give the listener a truthful understanding of who these killers really were and the extent of their criminal behavior. The show is produced and hosted by Thomas W ...
B
Beyond the Darkness

1h ago1h ago
Subscribe
Unsubscribe
Weekly+
Every week host Dan Zupansky will interview the true crime authors that have written about the most shocking killers of all time.
4
48 Hours

5d ago5d ago
Subscribe
Unsubscribe
Weekly
Experience the best in intriguing crime and justice cases that touch on all areas of the human experience, including greed and passion, presented by the award-winning team at CBS News' "48 Hours."
C
Criminal

11h ago11h ago
Subscribe
Unsubscribe
Monthly+
Criminal is a podcast about crime. Not so much the "if it bleeds, it leads," kind of crime. Something a little more complex. Stories of people who've done wrong, been wronged, and/or gotten caught somewhere in the middle. We are a proud member of Radiotopia, from PRX, a curated network of extraordinary, story-driven shows. Learn more at radiotopia.fm.
T
The Minds of Madness - True Crime Stories

5d ago5d ago
Subscribe
Unsubscribe
Monthly+
Ordinary people who do unthinkable things...The Minds of Madness is a True Crime Podcast that examines the most disturbing criminal minds and the impact violent crimes have on survivors of homicide.
Listen to 500+ topics