History Cris Alvarez Cinema Military History Society Communities Military Podcasting Education University Press
By Cris Alvarez. Discovered by Player FM and our community — copyright is owned by the publisher, not Player FM, and audio is streamed directly from their servers. Hit the Subscribe button to track updates in Player FM, or paste the feed URL into other podcast apps.


MP3•Episode home
By Cris Alvarez. Discovered by Player FM and our community — copyright is owned by the publisher, not Player FM, and audio is streamed directly from their servers. Hit the Subscribe button to track updates in Player FM, or paste the feed URL into other podcast apps. 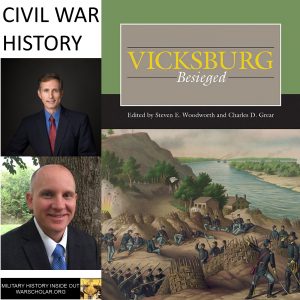 Check out this book here https://amzn.to/36d5SQe

Steven Woodworth has been studying, writing about, and teaching US Civil War history for years. He co-edits the Southern Illinois University Press series on the US Civil War Western Campaigns series and we spoke about the latest volume in the series about the Siege of Vicksburg.

(THE AUDIO PLAYER IS AT THE BOTTOM OF THE POST.)

(Note: The sound recording in the first ten minutes is a little [muffled] flat but it clears up after that.)

0:39 – Steven talks about why he helped create a book on the Vicksburg campaign of the US Civil War.

4:14 – Steven talks about how he got into studying the US Civil War.

7:11 – Steven talks about the eight essays in the book including essays on the US Colored Troops, Grant, sharpshooters, night actions, Vicksburg mines, civilians, Louisianans, and attitudes about the fall of Vicksburg.

11:42 – Steven talks about the Army of the Tennessee and the deficiencies it had.

18:27 – Steven talks about the importance of West Point in the course of US history and the US Civil War. He also discusses the nature of the Seige of Vicksburg.

22:40 – Steven talks about the goals of the Vicksburg siege operations.

26:17 – Steven talks about Vicksburg and foreign powers intervening in the US Civil War.

29:30 – Steven discusses whether the South protected Vicksburg as well as they should have.

42:09 – Steven talks about how they put the book together.

47:14 – Steven talks the importance of a book like this in regards to Vicksburg.

49:24 – Steven talks about the demoralizing effect of the fall of Vicksburg for the Confederates.

54:39 – Steven talks about attempts to convince Southerners to stop fighting the war.

58:50 – Steven’s books and the series can be found on the Southern Illinois University Press.

Check out this book here https://amzn.to/36d5SQe

As an Amazon Associate I earn from qualifying purchases.

Start listening to #Military History Inside Out on your phone right now with Player FM's free mobile app. Your subscriptions, bookmarks & playlists will sync across web and mobile apps.

Similar to Military History Inside Out

22d ago3w ago
Subscribe
Unsubscribe
Monthly
AnthroPod is produced by the Society for Cultural Anthropology (http://www.culanth.org). Each episode, we explore what anthropologists and anthropology can teach us about the world and people around us.
C
Conversations in Anthropology

16d ago2w ago
Subscribe
Unsubscribe
Monthly
A podcast about life, the universe and anthropology produced by David Boarder Giles, Timothy Neale, Cameo Dalley, Mythily Meher and Matt Barlow. Each episode features an anthropologist or two in conversation, discussing anthropology and what it has to tell us in the twenty-first century. This podcast is made in partnership with the American Anthropological Association and with support from the Faculty of Arts & Education at Deakin University.
N
Nerdonomy

21d ago3w ago
Subscribe
Unsubscribe
Daily+
Nerds on Film and Nerds on History have each had their last word. And yet like the legendary Phoenix (the bird, not Jean Grey), a new podcast rises from their ashes. Are we still covering Film? Yes. Are we bringing back History episodes? Absolutely. What about those long talked-about Nerds on Words and Nerds on Books episodes, or even Nerds on Science? We’ll definitely cover those too. We are now, simply, Nerdonomy. Our rebranded podcast uses the season format, and episodes will release week ...
T
The History of Rome

3y ago3y ago
Subscribe
Unsubscribe
Monthly
A weekly podcast tracing the history of the Roman Empire, beginning with Aeneas's arrival in Italy and ending with the exile of Romulus Augustulus, last Emperor of the Western Roman Empire. Now complete!
H
History of the Crusades

3M ago12w ago
Subscribe
Unsubscribe
Monthly+
Over 900 years ago, thousands of Christians invaded the Middle East, intent on taking the Holy Land from the Muslims. The following 200 years were marked by a series of military campaigns known as the Crusades. Join us to follow the history of the Crusades from 1095 onwards. Castles, battles, religious clashes, Richard the Lionheart, the Assassins, Eleanor of Aquitaine, Saladin, the Knights Templar - all will feature as we examine one of the most interesting periods in history.
S
SpyCast

3d ago3d ago
Subscribe
Unsubscribe
Weekly
Each week, the International Spy Museum will offer a new SpyCast featuring interviews and programs with ex-spies, intelligence experts, and espionage scholars. SpyCast is hosted by Dr. Andrew Hammond (https://www.spymuseum.org/press/press-archive/2020-press-releases/spy-museum-names-andrew-hammon/) , the museum's historian and curator. Dr. Hammond specializes in intelligence, diplomatic, and military history, with expertise in the late-WWII and early-Cold War eras. The International Spy Muse ...
O
On this day in Blues history

8m ago8m ago
Subscribe
Unsubscribe
Daily+
What happened on this date in the history of the Blues?
T
The History Network

4d ago4d ago
Subscribe
Unsubscribe
Monthly
The military history podcast specialists, looking at all aspects of war through the ages.
C
CNN 10 (video)

1h ago1h ago
Subscribe
Unsubscribe
Daily
CNN 10 is a 10-minute digital news show that serves a growing audience interested in compact on-demand news broadcasts ideal for explanation seekers on the go or in the classroom.
B
BackStory

4M ago16w ago
Subscribe
Unsubscribe
Weekly
BackStory is a weekly public podcast hosted by U.S. historians Ed Ayers, Brian Balogh, Nathan Connolly and Joanne Freeman. We're based in Charlottesville, Va. at Virginia Humanities. There’s the history you had to learn, and the history you want to learn - that’s where BackStory comes in. Each week BackStory takes a topic that people are talking about and explores it through the lens of American history. Through stories, interviews, and conversations with our listeners, BackStory makes histo ...
Listen to 500+ topics