History Cris Alvarez Cinema Military History Society Communities Military Podcasting Education University Press
By Cris Alvarez. Discovered by Player FM and our community — copyright is owned by the publisher, not Player FM, and audio is streamed directly from their servers. Hit the Subscribe button to track updates in Player FM, or paste the feed URL into other podcast apps.

Why? Inactive feed status. Our servers were unable to retrieve a valid podcast feed for a sustained period.

What now? You might be able to find a more up-to-date version using the search function. This series will no longer be checked for updates. If you believe this to be in error, please check if the publisher's feed link below is valid and contact support to request the feed be restored or if you have any other concerns about this.

By Cris Alvarez. Discovered by Player FM and our community — copyright is owned by the publisher, not Player FM, and audio is streamed directly from their servers. Hit the Subscribe button to track updates in Player FM, or paste the feed URL into other podcast apps. 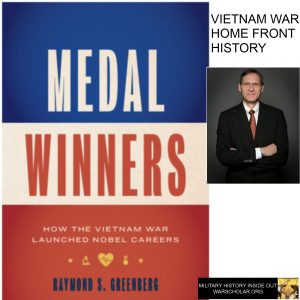 Check out this book here https://amzn.to/3hMKfcL

Raymond Greenberg has spent decades in the field of medicine. He recently wrote a book on Nobel prize winners who worked at the National Institutes of Health during the Vietnam War. We spoke about the book, military medicine, WWII, the Vietnam War, and the process of getting the book published.

(The audio player is at the bottom of the post.)

0:52 – Ray talks about his interest in the history of Nobel laureates.

6:30 – Ray talks about the research that these scientists worked on at NIH.

8:07 – Ray talks about Dr. Anthony Fauci’s connection to these programs.

9:52 – Ray talks about the obligations these doctors had when drafted.

12:09 – Ray talks about the “golden age” of physicians doing research.

15:39 – Ray talks about the unintended effects of the draft in developing new scientists and medicine.

19:46 – Ray talks about alternatives the military created to the doctors’ draft including the Uniformed Services Medical School.

22:00 – Ray talks about how the book is divided into pre-NIH years, the time the scientists spent at the NIH, and then their Nobel prizes.

24:44 – Ray talks about medical advances made during the Vietnam War including rapid evacuation.

26:00 – Ray talks about how he researched the book including interviews with the Nobel prize winners.

27:52 – Ray talks about when people understood the nexus between NIH and the Nobel prize winners.

31:24 – Ray talks about how the end of the Vietnam War negatively affected the NIH.

34:20 – Ray talks about applications to the Uniformed Health Services.

37:30 – Ray talks about Vietnamese scientists during the Vietnam War.

38:18 – Ray talks about the interviewing process.

38:56 – Ray talks about the winners’ feelings about having been in the program.

42:29 – Ray talks about the cultural benefits of working at the NIH during the Vietnam War.

45:26 – Ray talks about the purpose of the NIH and how it was expanded during WWII to develop combat advantages. One concern was German biomedical advances to create better fighters.

49:09 – Ray talks about how WWII was a major turning point in the development of smart warfare.

53:03 – Ray differentiates between doctors and scientist-doctors.

57:28 – More information on Ray’s can be found on the University of Texas Press website.

Check out this book here https://amzn.to/3hMKfcL

As an Amazon Associate I earn from qualifying purchases.

Similar to Military History Inside Out

2M ago8w ago
Subscribe
Unsubscribe
Monthly+
The Birdy Num Num Indian podcast is all about inspiring the creative Indian.With over 35M views online spanning a career in IT and Stand Up Comedy, Indian-American comedian Sanjay Manaktala is the epitome of "because life begins after engineering." A good chunk of his guests also live by this philosophy. Every Monday and Thursday Sanjay talks creativity, dating, technology, life, current events and general life advice from the perspective of a 30 something Indian American guy traveling the w ...
B
BackStory

11M ago48w ago
Subscribe
Unsubscribe
Monthly
BackStory is a weekly public podcast hosted by U.S. historians Ed Ayers, Brian Balogh, Nathan Connolly and Joanne Freeman. We're based in Charlottesville, Va. at Virginia Humanities. There’s the history you had to learn, and the history you want to learn - that’s where BackStory comes in. Each week BackStory takes a topic that people are talking about and explores it through the lens of American history. Through stories, interviews, and conversations with our listeners, BackStory makes histo ...
T
The History of Rome

4y ago4y ago
Subscribe
Unsubscribe
Monthly
A weekly podcast tracing the history of the Roman Empire, beginning with Aeneas's arrival in Italy and ending with the exile of Romulus Augustulus, last Emperor of the Western Roman Empire. Now complete!
T
The History Network

4d ago4d ago
Subscribe
Unsubscribe
Monthly
The military history podcast specialists, looking at all aspects of war through the ages.
O
On this day in Blues history

7m ago7m ago
Subscribe
Unsubscribe
Daily+
What happened on this date in the history of the Blues?
S
SpyCast

2d ago2d ago
Subscribe
Unsubscribe
Monthly+
Lexicon Valley is a show about language, from pet peeves, syntax, and etymology to neurolinguistics and the death of languages. Hosted by linguist John McWhorter.
Listen to 500+ topics