Host Laura Reeves visits with Dorian Farmer and Rhonda Arza talk about Summit Joint Performance. This is a chondroitin product, used for years in Olympic horse circles, but now available for dogs and, hopefully, humans in the near future.

“This particular product was actually made to go into eyes, human eyes, during corneal lens transplant surgeries as an anti-inflammatory,” Summit Joint Performance founder Farmer said.

Farmer’s story of testing Summit on his personal “guinea pig” animals is inspiring.

“We injected Ultra on a Wednesday evening. At that point in time she couldn't get up off the ground. By Thursday morning when we woke up, she was standing in our bedroom wagging her tail looking at me. She had got up off the ground by herself, into the bedroom and was waking us up. She could walk around the house. She could sit down. She could lay down and she could get back up. That was within 12 hours. By the following day she was trotting around the house and actually playing with me.

“(A couple days later I got a video of) Ultra chasing the golf cart at a dead run from the back pasture to the front pasture. It's about 900 yards from one to the other. She lived for another year pain free because of it. That truly was the point where I knew that we had something that was incredible. She had been on all the pain relievers and all the other arthritic medication and everything else and nothing was touching it. One shot of this new product and saved her life. I mean, we were going to euthanize her….” 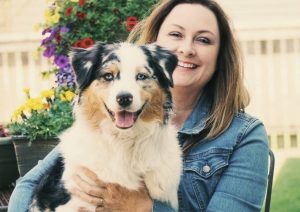 “I was a horse trainer for 28 years and one of the things that I knew was that I didn't want to be a horse trainer for 29 years. So, I needed an exit strategy. Summit last November became a direct sales company. I had experience in the field, so I knew that direct sales was a way to make significant income and create an exit strategy not only for myself, but for other trainers who were looking to retire, get out, whatever they needed to do.

“When this came along, because of the level of sponsored riders that this company already had in place, like people were putting it in their $10,000,000 Olympic level horses, we had guys like McLain Ward (using the product), I knew that we had a product that was definitely something that I could talk about.

“I put it into my 20-year-old jumper and he just turned right around and acted like he was ten. I wanted to get into the dog space because we have performance dogs. My husband shows in rally and obedience and we have Australian Shepherds. Knowing that it was going to be turning over to oral (versus intramuscular injection) was going to open up the whole planet for us. Not only dog show people, but pet owners and people who have older cats and things like that.

“We all take glucosamine chondroitin supplements that we get in the grocery store,” Farmer noted. “They say ‘in six months you should start to see some results.’ I don't do anything for six days if I don't see results. I am a very instant gratification, transactional kind of guy. I'm going to do this, I expect to see results. That was what we saw with this. I didn't have to wait six weeks or a month or two weeks, we saw results the next day.”

4d ago4d ago
Subscribe
Unsubscribe
Weekly
Let’s Drone Out is a lighthearted chatty drone-focussed podcast. and radio show covering anything and everything drone-related! Recorded live and interactively every Thursday 8-9 pm UK time on Youtube, come join the interactive chat. Jack and his wife Tony, as well as the rest of the LDO crew, are here to bring together everyone from noob FPV’ers to pro commercial aerial photographers; keeping tabs on the latest tech, legal, events and drone news, talking to the people behind the headlines a ...
t
the Birdy Num Num Podcast

seconds ago30s ago
Subscribe
Unsubscribe
Weekly+
The Focus on Parenting Podcast provides moms and dads with helpful tips on how to be a better parent each day to help raise kids on the right path.
T
That New Mom Life

5d ago5d ago
Subscribe
Unsubscribe
Weekly
That New Mom Life, a new podcast from Parents Magazine, is here to hold your hand through those first bleary-eyed, isolating months of parenthood, when you’re not even sure what day it is.Each week, co-hosts Grace Bastidas, Editor-in-Chief of Parents Latina, and Desiree Fortin, mom of triplets and a newborn, share the mic with leading experts and fellow parents as they talk sleep deprivation, body changes, making mom friends, and more. No topic is off-limits!For more information visit parent ...
F
Focus on the Family Broadcast

11m ago11m ago
Subscribe
Unsubscribe
Daily
Focus on the Family is a half-hour daily dose of encouragement and advice for the family with Jim Daly and John Fuller. Focus on the Family began airing in 1977. It is now carried daily on 2,000 radio outlets in the United States and has become one of today's most recognized Christian radio programs.
C
CarCast

seconds ago1m ago
Subscribe
Unsubscribe
Weekly+
The Focus Marriage Podcast features relatable advice on healthy marriage with stories from guest speakers that encourage every couple to build a deeper connection.
Listen to 500+ topics