Science Emory University
By The Academic Minute. Discovered by Player FM and our community — copyright is owned by the publisher, not Player FM, and audio is streamed directly from their servers. Hit the Subscribe button to track updates in Player FM, or paste the feed URL into other podcast apps.


MP3•Episode home
By The Academic Minute. Discovered by Player FM and our community — copyright is owned by the publisher, not Player FM, and audio is streamed directly from their servers. Hit the Subscribe button to track updates in Player FM, or paste the feed URL into other podcast apps. 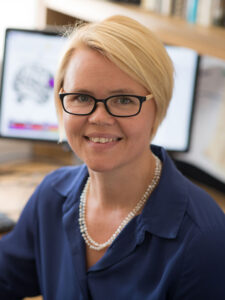 Don’t want to exercise? How about a dance instead?

Helena Blumen, assistant professor in the department of medicine at the Albert Einstein College of Medicine, gets us moving and shaking.

The overall theme of my research is to optimize gait and cognition in aging. I examine the potential for using collaboration, computer-based actions games, motor imagery and social dancing as a tool to improve cognition and mobility in aging and pre-dementia. The ultimate goal of my laboratory-based studies is to develop and test interventions that can be used to optimize cognition in community-dwellling older adults, and older adults that reside in nursing homes or naturally-occurring retirement communities.

Dancing is a complex activity that involves physical, cognitive, and social components. Some studies have shown that older adults can benefit from dancing – but there have been few studies examining its potential to prevent or delay cognitive decline, Alzheimer’s disease, and related dementias.

We are conducting a small, randomized controlled trial to compare the effects of social dancing with treadmill-walking in older adults at increased risk for Alzheimer’s disease. We are trying to discover if dancing can improve attention, planning and problem-solving processes, collectively referred to as executive functions. We are also examining if dancing can improve brain function.

Researchers have found that aerobic exercise benefits s cognitive performance. But such benefits are modest at best, and some older adults are unwilling or unable to follow a regular exercise program. Dancing may be more appealing and has a social component that some older adults prefer.

For our study, we’ve identified 32 older adults at increased risk for dementia based on memory test scores and their own reports about difficulty with decision-making, keeping track of finances, or forgetfulness. We conduct executive function and other cognitive tests, as well as MRI brain scans, before they start the program. For six months, half of them walk on a treadmill twice a week. The others participate in twice-weekly dance classes where they learn and practice the cha-cha, fox trot, hustle and other dances. We repeat the cognitive tests and brain scans after the study ends.

Our hypothesis is that because dancing is a more complex activity than treadmill-walking, we will see more benefits in executive functions, and brain regions associated with executive functions. With our initial results, we plan to design a larger study to delve more deeply into the effect of dancing on brain health and dementia prevention.

Start listening to #The Academic Minute on your phone right now with Player FM's free mobile app. Your subscriptions, bookmarks & playlists will sync across web and mobile apps.

Similar to The Academic Minute

33m ago33m ago
Subscribe
Unsubscribe
Monthly+
[We have episodes in German and English] How do scientists uncover phenomena and explain their connections? How do engineers design machines, methods and infrastructure? At omega tau, experts give detailed answers. Over the last ten years, we have produced 300 episodes in which we dug deeper, until we ran out of questions. Join us on our journey through the world of science and engineering: the closer you look and listen, the more interesting things get.
T
The BMJ Podcast

3h ago3h ago
Subscribe
Unsubscribe
Weekly+
The BMJ is an international peer reviewed medical journal and a fully “online first” publication. The BMJ’s vision is to be the world’s most influential and widely read medical journal. Our mission is to lead the debate on health and to engage, inform, and stimulate doctors, researchers, and other health professionals in ways that will improve outcomes for patients. We aim to help doctors to make better decisions.
M
More or Less: Behind the Stats

2d ago2d ago
Subscribe
Unsubscribe
Weekly+
Tim Harford and the More or Less team try to make sense of the statistics which surround us. From BBC Radio 4
S
Storage Unpacked Podcast

7d ago0w ago
Subscribe
Unsubscribe
Weekly
Embedded is the show for people who love gadgets. Making them, breaking them, and everything in between. Weekly interviews with engineers, educators, and enthusiasts. Find the show, blog, and more at embedded.fm.
J
James O'Brien's Mystery Hour

7d ago0w ago
Subscribe
Unsubscribe
Monthly+
If you've ever wondered "why", then this is the hour for you. Sometimes simple, sometimes intelligent, but almost always entertaining, probably the best hour of radio you could ever download!
D
Dr Karl Podcast

2h ago2h ago
Subscribe
Unsubscribe
Weekly
Join Dr Karl Kruszelnicki, Lucy Smith and their scientific guests, with a bunch of curious triple j listeners for a weekly injection of science, myth-bashing and answers!
Listen to 500+ topics