The Armchair Philosopher « »
The Carnality Of Josiah Hesse

This week my old friend Josiah Hesse drops by to talk about his new book Carnality: Sebastian Phoenix and the Dark Star out now on Suspect Press. We discuss his Carnality series, atheism, Evangelicalism, Christian music, the Exvangelical movement and a whole lot more. 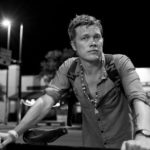 Josiah is a freelance journalist in Denver, Colorado. He writes about politics, marijuana and evangelical culture and theology, and is a regular contributor to the Guardian and Vice. He’s also had bylines in Politico, High Times, and The Denver Post, and is the senior editor of the Denver arts and literature magazine Suspect Press.

An Iowa native and leading authority on 90s Christian rock, Josiah released his debut novel Carnality: Dancing On Red Lake in 2015. A psychological horror about growing up in an isolated farming community fueled by pentecostal Christianity and methamphetamine, the book was hailed as “one of the finest novels to come out of Denver’s burgeoning arts scene.”

Josiah is currently promoting his next installment Carnality: Sebastian Phoenix and the Dark Star, which was written in part at Owl Farm in Woody Creek, Colorado – the longtime home of Hunter S. Thompson.

5d ago5d ago
Subscribe
Unsubscribe
Weekly+
Radio Ahmadiyya - the real voice of Islam is a weekly Radio Broadcast in the Urdu language with the mandate to educate its listeners about Islam and Ahmadiyyat. It presents the teachings of Islam as explained in the Holy Qur'an and by the Holy Prophet of Islam, Muhammad (Peace and Blessings of Allah be on him).
F
Fr. Larry Richards of The Reason For Our Hope Foundation Podcast

6m ago6m ago
Subscribe
Unsubscribe
Daily
Fr. Larry Richards is the founder and president of The Reason for our Hope Foundation, a non- profit organization dedicated to "spreading the Good News" by educating others about Jesus Christ. His new homilies are posted each week.
W
World Spirituality

13h ago13h ago
Subscribe
Unsubscribe
Daily
To support this ministry financially, visit: https://www.oneplace.com/donate/207 Let Christian Research Institute President Hank Hanegraaff and his guests equip you to defend your faith against errors and false teachers, and help you stay strong in your walk with the Lord.
W
Weekly Sanga

13m ago13m ago
Subscribe
Unsubscribe
Weekly+
Mormon Stories is an attempt to build understanding between and about Mormons through the telling of stories in both audio and video formats.
Listen to 500+ topics