MP3•Episode home
By Matt Bruce. Discovered by Player FM and our community — copyright is owned by the publisher, not Player FM, and audio is streamed directly from their servers. Hit the Subscribe button to track updates in Player FM, or paste the feed URL into other podcast apps. 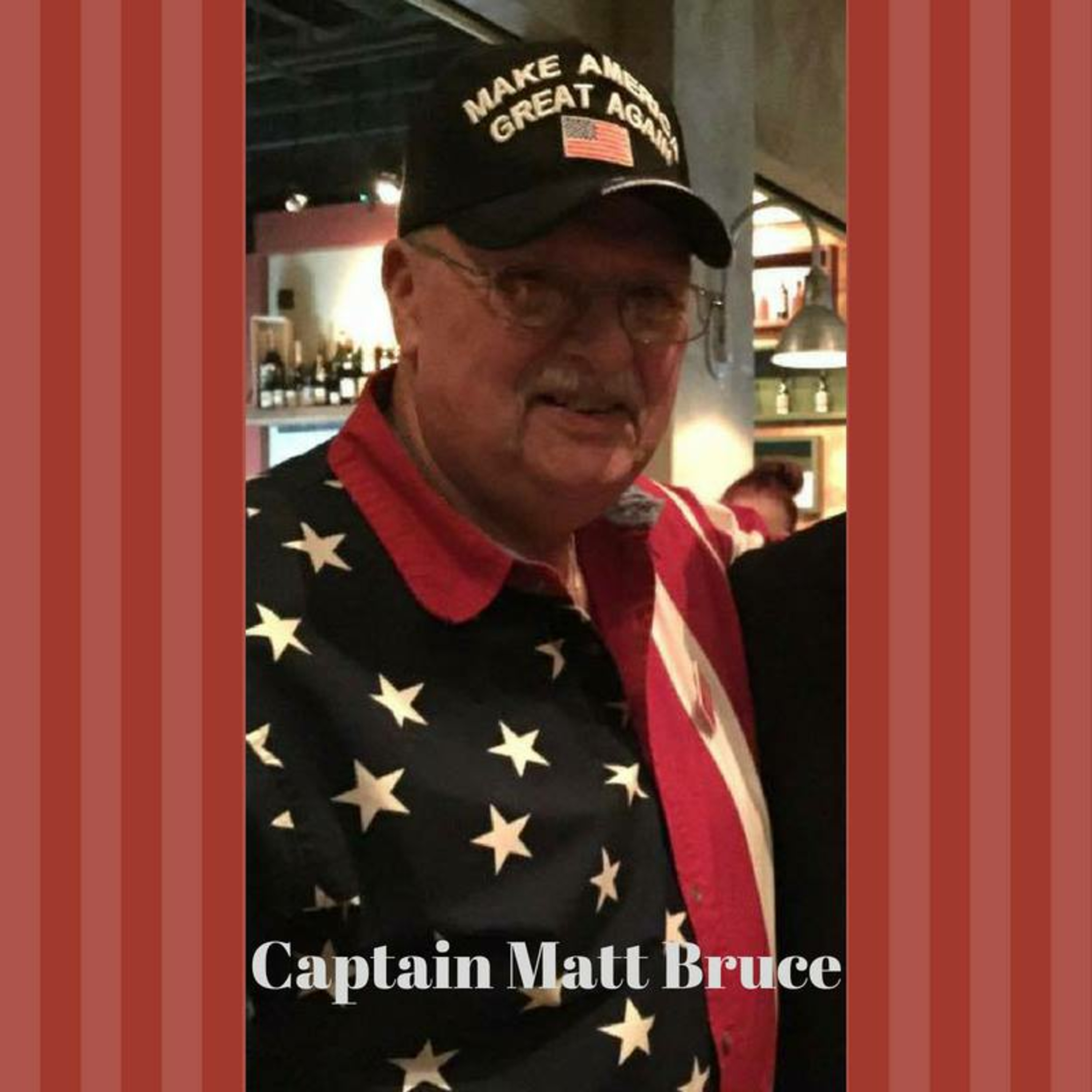 ***Tomorrow's News, TONIGHT!*** Enjoy our Monday Podcast of "The Captain's AMERICA - Third Watch" hosted by Retired Captain Matt Bruce. This Radio Show Is all about America plus those who Defend, Protect & Serve her keeping all of us FREE & SAFE... America is in trouble, beset by Progressive Left Liberal Socialists who are trying to 'fundamentally change' & destroy our great Country! We tell you how to use tactics against the Progressive Left Liberal Socialist Democrats that can really help America!. We will NOT let them take over our Country & are explaining what we can do to defend America against these Democrat Socialists... "The Captain's AMERICA Third Watch" is celebrating 20 years on the Radio where it's ALL about America & WE the PEOPLE. Listen to 'The Captain' LIVE Monday January 20th from 2-6 AM ET as we broadcast from Tampa, FL in the #MausNissan Studio of our Salem Media Group Flagship Radio Stations #AM860theanswer & #AM930TheAnswer in the #18 Radio Market of Tampa-Clearwater-St Petersburg, FL, USA... Our Guests Tonight Are: Kyle Warren - The Professor of Politics, Denise Simon - Founders Code Intel Analyst, Chris Markowski - The Watchdog on Wall Street, Frank Salvato - Underground USA plus Patrick Highland - The Insurance Quarterback on Sports... We proudly honor & support America's Active Duty Military, Veterans, EMT's, Firefighters, Police, 911 Dispatchers & ALL First Responders! We've got your 6 on this Radio Show. We also remember all those working on the Third Watch keeping America rolling along... You'll also hear our Military & Veterans News segments along with our Truckers 'National Highway & Weather Report' hourly. We're happy to take your phone calls on the air LIVE at 1-877-969-8600... Our Radio Show is Nationally Syndicated by the Genesis Communications Radio Network via the Westwood One XDS Satellite. We are also heard on several Salem Media Group Affiliates, leading Independent Stations across America, around the World via numerous Digital Internet Streams & on our Caribbean Radio Affiliate AM 1000 WVWI, serving San Juan, Puerto Rico plus Saint Thomas-Charlotte Amalie, Virgin Islands & Western Bahamas... Note: Ms Rosemary has been recuperating from a 'Mild Stroke' she suffered just before Christmas. She's doing much better now & is now home. She said she's "looking forward to 2020 & coming back on The Captain's AMERICA Third Watch Radio Show." #America #Americans #Border #Congress #Conservative #Constitutional #Democrats #Deplorables #DonaldTrump #Economy #Florida #GOP #Guns #HomelandSecurity #Immigration #Impeachment #Iran #Iraq #Israel #Libertarian #Military #News #Opinion #Politics #Republican #Talk #Terrorism #TheSwamp #War

Start listening to #The Captain's AMERICA - Third Watch... on your phone right now with Player FM's free mobile app, the best podcasting experience on both iPhone and Android. Your subscriptions will sync with your account on this website too. Podcast smart and easy with the app that refuses to compromise.

15h ago15h ago
Subscribe
Unsubscribe
Monthly
Listen to "NBC Nightly News," providing reports and analysis of the day's most newsworthy national and international events. This audio podcast, updated each weekday evening by NBCNews.com, brings you the day's show in its entirety. For more from "Nightly News", visit http://www.nbcnews.com/nightly-news
K
KQED's The California Report

2d ago2d ago
Subscribe
Unsubscribe
Monthly+
Congressional Dish is a twice-monthly podcast that aims to draw attention to where the American people truly have power: Congress. From the perspective of a fed up taxpayer with no allegiance to any political party, Jennifer Briney will fill you in on the must-know information about what our representatives do AFTER the elections and how their actions can and will affect our day to day lives. Hosted by @JenBriney. Links to information sources available at www.congressionaldish.com
N
NBC Meet the Press

2d ago2d ago
Subscribe
Unsubscribe
Monthly+
NBC News' Meet the Press is the longest-running television show in history, celebrating its 70th anniversary. If it's Sunday, it's Meet the Press with Chuck Todd.
T
The Guardian UK: Politics Weekly

18h ago18h ago
Subscribe
Unsubscribe
Weekly
Every Monday, the libertarian editors of the magazine of “Free Minds and Free Markets”—Matt Welch, Nick Gillespie, Katherine Mangu-Ward, and Peter Suderman—discuss and debate the week’s biggest stories and what fresh hell awaits us all.
L
Left, Right & Center

4d ago4d ago
Subscribe
Unsubscribe
Weekly
Left, Right & Center is KCRW’s weekly civilized yet provocative confrontation over politics, policy and pop culture.
M
My History Can Beat Up Your Politics

2d ago2d ago
Subscribe
Unsubscribe
Monthly+
Since 2006, bringing historical context to the politics of today. TV pundits discuss politics in a vacuum. Cable news tells you everything is 'breaking news' but in most cases, events have long roots in history. In this podcast, we smash and bash the politics of today with a healthy dose of history
M
Morning Joe