The UltiVerse « »
DeAnna and Chase


MP3•Episode home
By Josh Seamon. Discovered by Player FM and our community — copyright is owned by the publisher, not Player FM, and audio is streamed directly from their servers. Hit the Subscribe button to track updates in Player FM, or paste the feed URL into other podcast apps.

In this episode I talk with DeAnna Ball and Chase Sparling-Beckley, this year’s UPA Spirit Award winners. We talk about what it’s like for them to have won the award as well as cover their thoughts on tough marks, the best tournaments they have ever been to, and how they got started in the world of Ultimate.

DeAnna: I was born in Gary, Indiana and grew up in Northwest Indiana (otherwise known as “The Region”). I did my undergrad at Purdue, where I first started playing Ultimate with a group of engineering grad students (1991). I attended Ohio State for my graduate work, and earned my PhD in Molecular, Cellular, and Developmental Biology in 2001. For the last five years, I have worked as an editor for science textbooks at Glencoe/McGraw-Hill. I also teach at Columbus State Community College.

In the time that I’ve lived in Columbus, Ohio, I have played Ultimate with the local men’s team, women’s teams from Cincinnati, Indianapolis, Ann Arbor, and Columbus, as well as a year of mixed with Cocoa (out of Columbus). I have played in the local summer league and have been minorly involved in the Columbus Ultimate Disc Association (CUDA). In 2006 I stepped in as the coach for the Ohio State Women’s Ultimate team–Fever.

I have volunteered for the UPA as a Women’s Regional Coordinator (Central Region. 1999-2002) and am the current National Women’s Director (2002-current). I have attended about 150 tournaments in the 16 years that I have been playing Ultimate, including participating in 5 UPA Championships (San Diego in 1999, and in Sarasota 2004-2007). Currently I am stepping out of competitive Ultimate but hope to play locally and continue attending tournaments.

I live with my partner Beth, 4 cats (Jake, Casey, Matilda, and Angus) and 3 dogs (Cody, Sidney, and Marty). 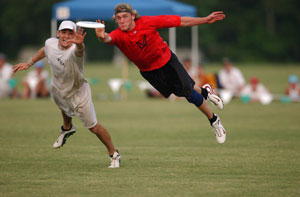 Chase: You can learn all about Chase here, here, and here (PDF).

I started playing ultimate in high school in Seattle, Washington, with a team named MoHo. From Seattle I attended college in Northfield, Minnesota at Carleton and played with the Carleton Ultimate Team for four years. During school in Minnesota I also started playing Club ultimate with the Minneapolis Men’s team, Sub Zero. After graduation I moved back to Seattle and began playing with Seattle Sockeye, where I have been for the last four years. Since moving home I have also been coaching ultimate at local high schools, and at the youth club level.