Hmmm there seems to be a problem fetching this series right now. Last successful fetch was on May&nbsp11,&nbsp2019&nbsp05:27 (

By Josh Seamon. Discovered by Player FM and our community — copyright is owned by the publisher, not Player FM, and audio is streamed directly from their servers. Hit the Subscribe button to track updates in Player FM, or paste the feed URL into other podcast apps.

In this episode I talk to the five that make up Five Ultimate. We talk about how they got started, where they’re headed, and what it’s like living life as a Titcomb. 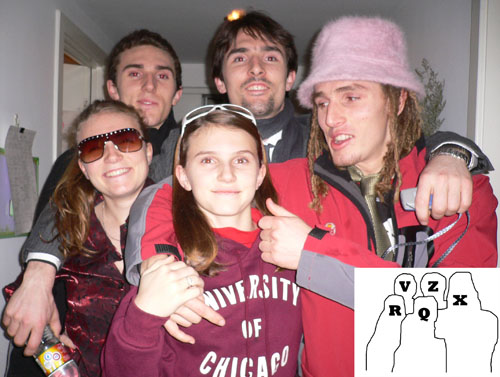 Five siblings: we are Zahlen, Xtehn, Vehro, Rohre, and Qxhna. Though originally from Seattle, we’ve recently also been based in Chicago, Beijing, and New England. We’ve played Ultimate for over 35 years combined, and with ages of 25, 24, 22, 20, and 14, we’re not stopping anytime soon. —Look for us on and off the field at tournaments around the world… who knows where we’ll next pop up!

Zahlen, age 25, is the head of production and R&D at Five Ultimate. He graduated from University of Chicago in International Studies, Economics, and Italian Literature. Before Five Ultimate, he worked in finance and healthcare consulting in Beijing. On the field, he plays mixed in Seattle, and captains the Beijing ultimate team, where he has been instrumental in growing ultimate as a common sport in China.

Xtehn, 24, is in charge of marketing and accounting for Five. He worked for the Italian Trade Commission in Chicago before starting Five Ultimate. Though he’s on the road travelling to ten tournaments around the country this winter, his base is in Seattle where he co-captained the Seattle #2 club team, Voodoo, and coaches the Roosevelt High School Ultimate team.

Vehro, 22, is in charge of sales and customer service for Five. He interned at the Northwestern Mutual Financial Network while attending the University of Chicago, but jumped head first into the company after moving to Seattle in April 2007. On the field, he was a co-captain of Seattle Voodoo in 2007.

Rohre, 20, is a junior at Dartmouth College in Hanover, NH, where she’s majoring in Chinese and Arabic, minoring in environmental studies, and is finally playing Ultimate again after years healing and rebuilding an injured right shoulder. Though currently away from Dartmouth researching the environmental sustainability of bamboo textile manufacturing, Rohre is continuing to be an on-call consultant for Five and is integrally involved with many of Five’s projects.

Qxhna, 14, is a freshman at The Hotchkiss School, where Z, X, V, and R also went to high school. Following up on her 8 years of schooling in French, Italian, and Chinese public schools, she’s concentrating in language studies and is the clear master of languages amongst the five kids. Because of the less developed youth Ultimate scenes outside of the US, she’s played almost exclusively at the club level in Asia, Europe, and the US. Before attending Hotchkiss, she trained as an acrobatic freestyle skier and was the French national champion in 2007 in the under-15 girls division.