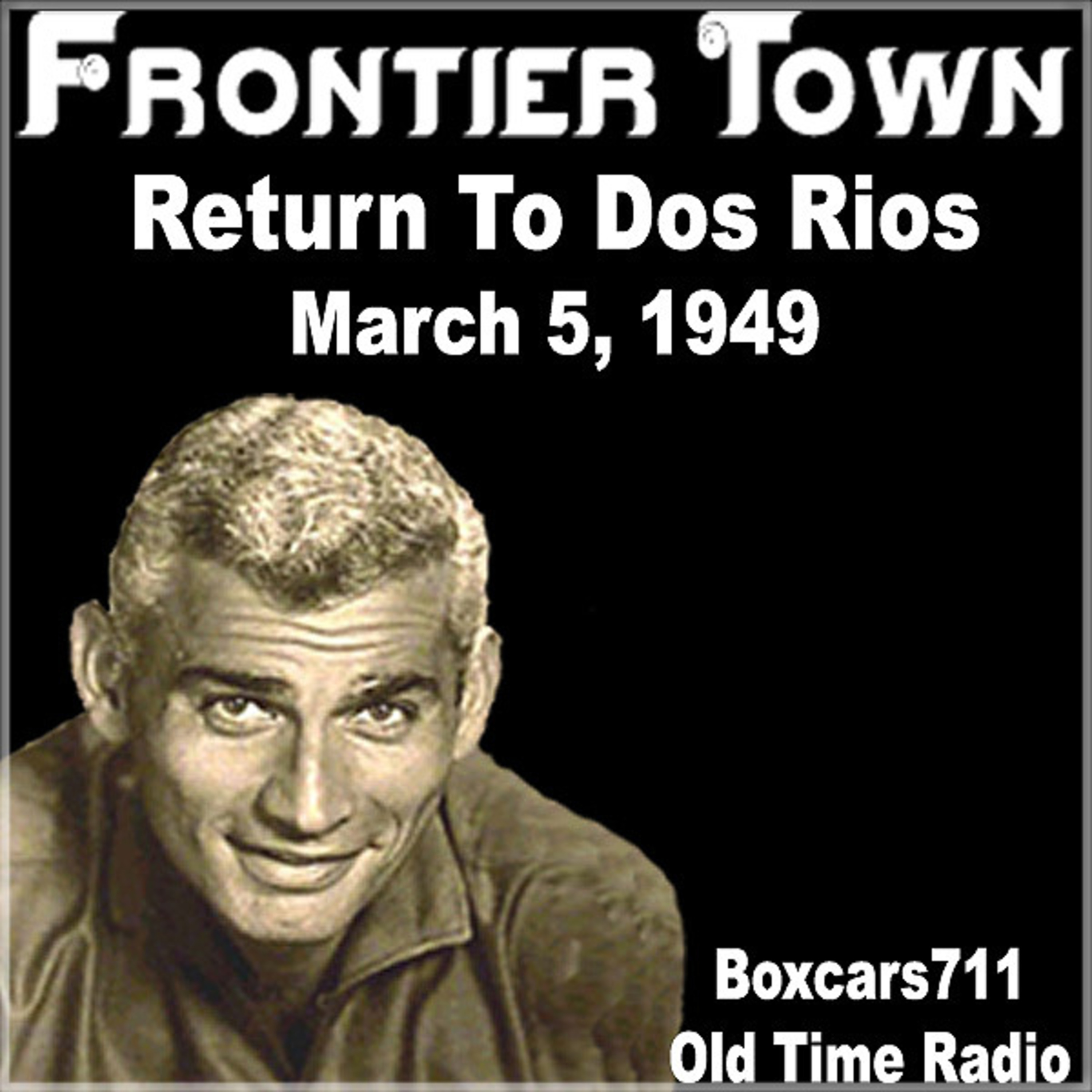 Boxcars711 Overnight Western "Frontier Town" - Return To Dos Rios (Aired March 5, 1949)
With hundreds of Hopalong Cassidy and other western hero film reruns airing night and day over Television, the race was on to find a more rivetting format for the great American western. Jeff Chandler opens the series billed as 'Tex' Chandler, in the role of Chad Remington. He acquires a sidekick in Episode #1: a garrulous quasi-scoundrel by the name of Cherokee O'Bannon, a man of obvious mixed breeding--and morals. Cherokee O'Bannon is portrayed by Wade Crosby in a somewhat over the top rendition of W.C. Fields. The superb mood music is provided by no less than Ivan Ditmars and Bob Mitchell, of Mitchell Boy Choir fame.
THIS EPISODE:

March 5, 1949. Program #1. "Return To Dos Rios" - Broadcasters Program Syndicate/Bruce Eells and Associates syndication. Music fill for local commercial insert. Chad Remington is a two-fisted lawyer in the town of Dos Rios. His sidekick, Cherokee O'Bannon (Wade Crosby), speaks in a W. C. Fields dialect. Either Bob Mitchell or Ivan Ditmars at the organ. Chad gets revenge on his father's killers and clears the name of the innocent Indian who was lynched for the crime. The date above and the dates for the other programs in this series are correct for KQW, San Francisco. This might have been the first time the series, which started to be recorded in 1948, was broadcast. Becasue of the nature of radio syndication, the programs were heard on many stations for years afterwards. Jeff Chandler (billed as "Tex Chandler" during the series), Wade Crosby, Bob Mitchell (organist), Bill Forman (announcer), Paul Franklin (writer, director), Bruce Eells (producer). 30:33. Episode Notes From The Radio Gold Index.

2y ago2y ago
Subscribe
Unsubscribe
Monthly
Voted #1 in Vue weekly Magazine , Metro Magazine , nominated 8th in the world against Adam corolla , Artie Lange and Dan Savage in the mature category & Winners of Monkeys Fighting Robots peoples choice award in the amateur podcast awards The Awesome Hour is a SOCAN licensed podcast on all things awesome from pop culture to strange news to bad life choices with a music bed of tasty tunes. From top40 to heavy metal and everything in between. The awesome hour is just that Alec , Ivan and Corbo ...
J
James Bonding

6d ago6d ago
Subscribe
Unsubscribe
Monthly
Matt and Matt. Bond over Bond. Matt Gourley and Matt Mira love James Bond so much they decided to make a podcast about it. Each episode they invite a guest to dive deep into one movie from the greatest film franchise known to man. Looking for the archives? All episodes older than 6 months can be found exclusively on Stitcher Premium, ad-free. Go to stitcher.com/premium and use promo code BONDING for 1 month free (and $5 off the annual plan!).
S
Spare the Rock, Spoil the Child radio feed

20d ago2w ago
Subscribe
Unsubscribe
Monthly
Barry first found music when he borrowed his sister's record collection when he was about eight and was hooked. When Caroline started it was a new beginning, and he listened to all the stations, but Caroline was his favourite by far. Later he became a singer in a band, then started doing discos when he was 18. He joined Caroline in 1977, touring the country with the Caroline Roadshow for 10 years, having great fun. Barry helped with tender trips and worked on the Ross Revenge in '84 and '85. ...
S
Sideshow Sound Theatre┃Halloween Music & Film Soundtrack Podcast

6h ago6h ago
Subscribe
Unsubscribe
Daily
Three of Australia's most respected personalities, Kate Ritchie, Tim Blackwell and Joel Creasey, come together to bring a conversational cheekiness to the drive shift. Joel Creasey joins Kate and Tim as the newest addition to Australia’s renowned drive show, with a combination of the day's hot topics, the best of digital and online and their unique benchmarks and games. Featuring the segments that Nova listeners have grown to love including Monday’s Mailbag, The Wednesday Wheel and the highl ...
K
KZradio הקצה

8h ago8h ago
Subscribe
Unsubscribe
Weekly+
Christian mom or dad, could you use some encouragement and support? Put your ear buds in for this Christian parenting podcast and get practical, faith-based inspiration through all stages of parenting — raising toddlers, navigating the school-age years, preparing for puberty, and seeing your teen soar with confidence. Hosted by Danny Huerta, in every 8 to 15 minute episode, you’ll hear parenting experts share Biblical truths, effective parenting techniques, and useful resources that will hel ...
T
That's Not Metal

4d ago4d ago
Subscribe
Unsubscribe
Weekly
The world’s best rock & metal podcast bringing you all the latest news, cutting edge opinions, honest reviews and laughs every Friday. 100% passion, 100% honesty, 100% of the time. Join us. @notmetalpod on Twitter & Instagram. Come join the discussion with a likeminded community of music fans on the That's Not Metal Facebook Focus Group www.facebook.com/groups/TNMFocus/.
Listen to 500+ topics