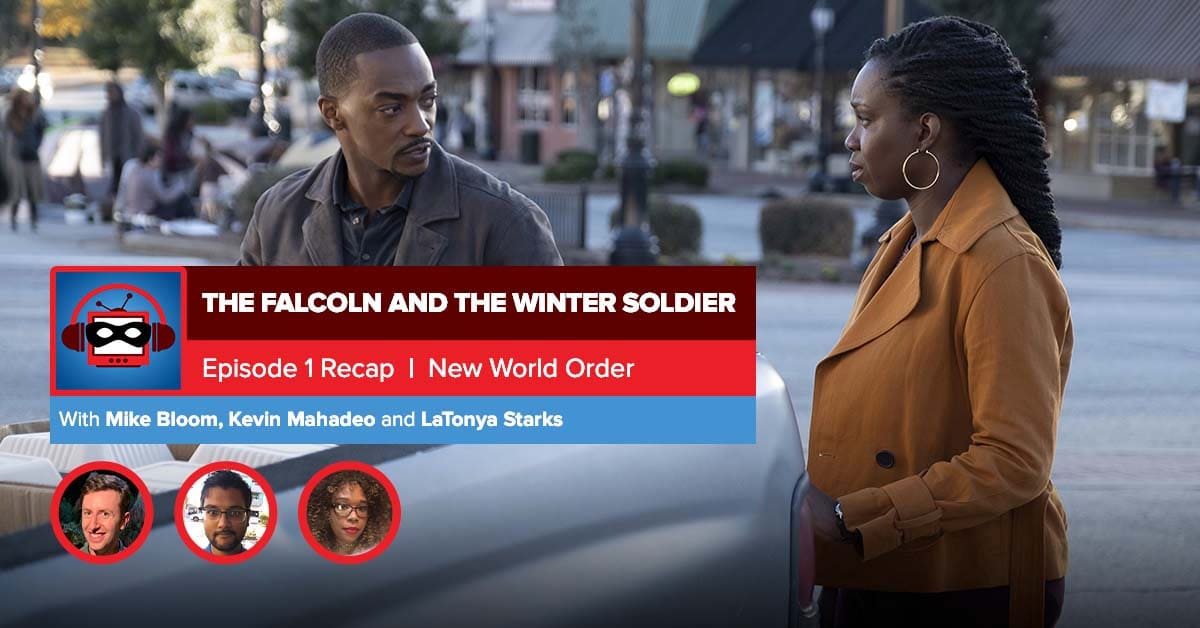 The Falcon and the Winter Soldier: Season 1 Episode 1 Recap | Everything is Super

Kevin Mahadeo (@KevMahadeo), LaTonya Starks (@lkstarks), and Mike Bloom (@AMikeBloomType) are flying high as they discuss all things Sam Wilson and Bucky Barnes in the Marvel Cinematic Universe’s Disney+ series “The Falcon and the Winter Soldier.”

This week: Kevin, LaTonya, and Mike get into everything from the intense premiere of the new series. They talk about the titular twosome on their separate yet similar paths to make amends, and what life looks like in a post-Blip universe. Plus: Is Steve Rogers really on the moon?

Next week: “Falcon and the Winter Soldier” episode two! Kevin, LaTonya and Mike will be here every Monday recapping the new Marvel series, so make sure to follow along.

The post The Falcon and the Winter Soldier: Season 1 Episode 1 Recap | Everything is Super appeared first on PostShowRecaps.com.

1d ago1d ago
Subscribe
Unsubscribe
Weekly
Jim and A.Ron review each week's episode of HBO's Game of Thrones and your feedback.
T
The Twilight Zone Podcast

14m ago14m ago
Subscribe
Unsubscribe
Monthly
Join Tom Elliot in the Rondo award winning Twilight Zone Podcast. A journey through Rod Serling’s classic television series. With reviews, interviews and readings from The Twilight Zone…
D
DumTeeDum - A show about The BBC's The Archers

5d ago5d ago
Subscribe
Unsubscribe
Weekly
DumTeeDum is a weekly podcast about The Archers that features Philippa Hall and Quentin Rayner and fans of the Archers. See acast.com/privacy for privacy and opt-out information.
M
Marvel's Wolverine

2y ago2y ago
Subscribe
Unsubscribe
Monthly
Marvel’s “Wolverine: The Lost Trail” is an epic quest that takes place in the Louisiana bayou. Following the events of Marvel’s “Wolverine: The Long Night,” Logan (Richard Armitage) returns to New Orleans in search of redemption, only to discover that his ex-lover, Maureen is nowhere to be found. And she's not the only one. Dozens of humans and mutants have gone missing, including the mother of a teenage boy, Marcus Baptiste. With Weapon X in close pursuit, Logan and Marcus must team up and ...
N
Now Playing - The Movie Review Podcast

2d ago2d ago
Subscribe
Unsubscribe
Weekly
Become a Paid Subscriber and get bonus podcasts: https://anchor.fm/nowplayingpodcast/subscribe Three playful movie reviewers break down a wide variety of film franchises by dedicating a podcast to every single sequel, remake, reboot, and spin-off in a series. Conversations are in-depth and cover production history, literary sources, gossip, merchandising, and good old fashioned personal opinion with loads of humor and critical insight. No cinematic universe is too obscure or sacred!
T
The Talking Dead - A podcast dedicated to the AMC TV series The Walking Dead

3d ago3d ago
Subscribe
Unsubscribe
Weekly
The Talking Dead is a fan podcast dedicated to the AMC TV series The Walking Dead. Tune in for news, rumours, reviews, and more!
Listen to 500+ topics