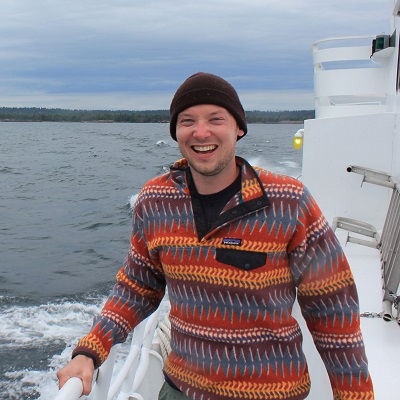 John Leman is a world traveler, outdoor adventurer, and curiosity-driven extrovert who is intent on exploring the depths of the human experience. Formerly a special education teacher, he is currently enrolled in the M.S.Ed. program in Mental Health Counseling and Counselor Education at Indiana University, where he also serves as a Research Coordinator with the Kinsey Institute. While he currently resides in Indiana, he has previously lived in Singapore, upstate New York, and Philadelphia. John tells the story of his deconversion from Evangelical Christianity, flowing through diverse ideas, opening to ongoing self-acceptance, and the importance of approaching all with compassion.

In the Ikigai segment, Wendy discusses how ikigai has been misunderstood and gives a revised introduction to the subtle topic via the five pillars of ikigai.

Wendy Sheridan and Robin Renée begin the episode with a Rewind from last show’s 3 Random Facts – a moose laws update! This show’s facts are more seasonal than random. They involve the Statue of Liberty’s arrival to the US, pumpkin pie (Thanks, Emma, at Plate Less Ordinary!), and a month Shakespeare never mentioned. In the News: the October 2nd Women’s Marches held in Washington, DC and around the US, the Biden administration’s Department of Homeland Security new border priorities, the Pandora Papers, and the importance of upcoming elections. At the end of the show, Robin and Wendy respond to a listener question about cartoons and music.

Check to make sure you are registered to vote! Vote.org

Tell us about your experiences with cultural diversity and interfaith dialogue.

Read books by Ken Mogi on ikigai and more.

Listen to “Decoding the Pandora Papers” on Pod Save the World.

Drunk moose can really be an issue! Read the story of Buzzwinkle in the Anchorage Daily News.

The post Paint With Ambiguity (Episode 110) first appeared on .

9m ago9m ago
Subscribe
Unsubscribe
Daily+
This is the latest news in English from NHK WORLD RADIO JAPAN. This service is daily updated. For more information, please go to https://www3.nhk.or.jp/nhkworld/.
T
The Glenn Beck Program

17h ago17h ago
Subscribe
Unsubscribe
Daily
Storytelling, insight and compelling perspective on American culture and politics. Glenn Beck's quick wit, candid opinions and engaging personality have made this one of the most popular radio programs in America. Watch The Glenn Beck Radio Program, Monday through Friday, 9am - 12pm ET on BlazeTV. www.BlazeTV.com/Glenn
S
Start Making Sense

4h ago4h ago
Subscribe
Unsubscribe
Weekly
Political talk without the boring parts, featuring the writers, activists and artists who shape the week in news. Hosted by Jon Wiener and presented by The Nation Magazine.
F
Fareed Zakaria GPS

4M ago16w ago
Subscribe
Unsubscribe
Daily
The stories you need to hear today, from Time.com. A SpokenEdition transforms written content into human-read audio you can listen to anywhere. It's perfect for times when you can't read - while driving, at the gym, doing chores, etc.
N
Newshour