Society Books Arts Interviews Authors Writing Tips Non Commercial France Francesca Rheannon Novelist
By Francesca Rheannon. Discovered by Player FM and our community — copyright is owned by the publisher, not Player FM, and audio is streamed directly from their servers. Hit the Subscribe button to track updates in Player FM, or paste the feed URL into other podcast apps.


MP3•Episode home
By Francesca Rheannon. Discovered by Player FM and our community — copyright is owned by the publisher, not Player FM, and audio is streamed directly from their servers. Hit the Subscribe button to track updates in Player FM, or paste the feed URL into other podcast apps.

We talk with Judy Batalion about her book, The Light of Days: The Untold Story of Women Resistance Fighters in Hitler’s Ghettos.

Then, another WWII story—this time fiction—told through an unforgettable cast of characters: we talk with Lissa Evans about V for Victory, the sequel to Crooked Heart.

And if you subscribe to our podcast, give us some love on wherever you get your podcasts. It really helps others to find the show.

Judy Battalion
In 1939, more than three million Jews lived in Poland, making up one of the most vibrant Jewish communities in Europe. When WWII ended, 90% of them had been murdered by Hitler’s regime.

The Nazi extermination program was implacable — but it did not go unresisted. Young people — and especially young women— who had been active in the Jewish youth movement before the War fought back against the Nazis. They cared for the sick, brought food to the hungry and mounted operations of rescue and refuge. They also carried out military-style campaigns of sabotage and assassination.

They didn’t expect to survive—and most didn’t. But some did. After the war, they found the world wasn’t interested in their stories of resistance—and even many of them just wanted to put it all behind them. Their heroic history went underground like their own resistance during the War.

But now that hidden history has been brought out of the shadows by Judy Battalion’s book The Light of Days: The Untold Story of Women Resistance Fighters in Hitler’s Ghettos.

The world has taken notice. The book is on numerous bestseller lists, including the New York Times— and Stephen Spielberg has already optioned it for a major motion picture. 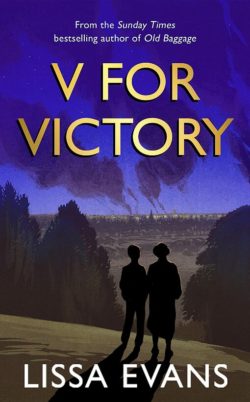 Back in 2015, we spoke with Lissa Evans about her novel Crooked Heart, a black comedy set in wartime London. It told the story of a precocious ten year old orphan, Noel, who is taken in by a small time con artist named Vera when he is evacuated from the London Blitz.

Now, Evans has come out with a sequel, V for Victory (it’s actually the third in a trilogy). Noel is almost fifteen now and he and Vera are still together, facing down the Blitz in a large house next to Hampstead Heath, where Vera has taken in lodgers, barely scraping by.

The story of those final days of the War—along with revelations of secrets the two have been hiding for years—is told by Lissa Evans in her signature poignantly comic touch.

Evans is the author of six novels for grownups and three for children.

seconds ago30s ago
Subscribe
Unsubscribe
Daily
Each week day RN Arts programs zoom in on a specific area of art and culture, brought to you by a specialist presenter. Subscribe to their podcasts separately by searching by name in your podcasting app.
G
Geek's Guide to the Galaxy - A Science Fiction Podcast

2+ y ago2+ y ago
Subscribe
Unsubscribe
Monthly
Ryan Jennings ran from the horrors of Crayton 18 years ago. Now is is coming back to face his greatest fears and search for answers.
T
The Sword and Laser

3d ago3d ago
Subscribe
Unsubscribe
Monthly+
Read along with the Sword and Laser book club! From classic science fiction to the latest gritty fantasy, we cover it. Subscribe for book discussions, author interviews, hot releases, and news from the genre fiction world!
T
The Guardian Books podcast

28d ago3w ago
Subscribe
Unsubscribe
Monthly+
The Guardian Books podcast is our weekly look at the world of books, presented by Claire Armitstead, Richard Lea and Sian Cain. In-depth interviews with authors from all over the world, discussions and investigations make this the perfect companion for readers and writers alike
M
Merriam-Webster's Word of the Day

3d ago3d ago
Subscribe
Unsubscribe
Monthly
Welcome to the Gracie Jiu Jitsu Rocks! podcast, a podcast dedicated to Gracie Jiu Jitsu and all things Gracie, including self defense, competition, anti bullying, women's self defense and empowerment, nutrition, and most especially the people involved in GJJ..........This podcast is for the average Joe; it's for anyone who practices, trains, teaches, or just loves to talk about or hear about Gracie Jiu Jitsu. We'll explore the lives of Gracie JJ practitioners, how they got involved with the ...
i
iFanboy - Comic Books

20m ago20m ago
Subscribe
Unsubscribe
Weekly+
The iFanboy.com Comic Book Podcast is a weekly talk show all about the best new current comic book releases. Lifelong friends, Conor Kilpatrick and Josh Flanagan talk about what they loved and (sometimes) hated in the current weekly books, from publishers like Marvel, DC, Image Comics, Dark Horse Comics, BOOM! Studios, IDW, Aftershock, Valiant, and more. The aim is to have a fun time, some laughs, but to also really understand what makes comic books work and what doesn’t, and trying to under ...
G
Good Mornings with Nicole and Prax

3m ago3m ago
Subscribe
Unsubscribe
Monthly+
Hi! We’re Nicole and Prax. Join our weekly conversations as we share inspiring lessons, stories and mindsets to help you free-up time and space to live a happier, healthier and more productive life 🌱 We try to to motivate, inspire and minsan maging funny 🤪 Connect with us! IG: http://instagram.com/nicoleandprax FB Page: https://www.facebook.com/goodmorningnicoleprax Get Productivity Tips on our YouTube Channel: http://bit.ly/nicoleandprax Join our community on FB Group: https://www.facebook. ...
T
Tangentially Speaking with Christopher Ryan